After traveling alone for a weekend, I decided to switch things up the next weekend and travel with 180 of my classmates! The school sponsored a pilgrimage to Poland, which was something I was eagerly looking forward to- and it exceeded my expectations.

We set out in charter buses on Thursday night, making the 12-hour journey to Poland. We arrived in Chestochowa at 6am on Friday, September 26th, and immediately made our way to the Chapel of the Black Madonna, where the image of Our Lady is unveiled each morning at 6am to a chorus of trumpets. I’m still wondering where the locals thought it strange to see almost 200 college students booking it up the hill to the church at the crack of dawn, but maybe that’s a normal sight. I sing in a group for Tuesday Mass at the Kartause, and we had the honor of getting to sing for the Mass that we had in that chapel. Upstairs in the church are the most unique stations of the cross I have ever seen. They combine the scenes from the passion with different aspects of Poland’s history, namely the Holocaust, the Black Madonna and John Paul II. Here’s an image of the 12th station.

Following Mass, we went to Auschwitz. There are no words sufficient to describe the depth of silence in such a place. It felt inappropriate to take pictures of something so solemn, but I am very grateful to have been able to pray for the souls of those who lost their lives there. But as with the image from the Stations of the Cross above, I was reminded that those who are suffering are never far from the suffering Christ on the cross, and that because of His sacrifice, suffering is not without meaning and is not without hope.

We spent that night in Krakow, and went on a walking tour of the city the next day. I absolutely LOVED Krakow! It’s one of my favorite places so far. It reminded me a lot of Salzburg, but there was some indescribable quality that made it different. I absolutely loved walking through the cobblestone streets, between the colored houses and shops, making our way to the market. The market in Krakow is simply incredible. You could walk around for hours and hours and never run out of something new to see. We had lunch there, and holy moly, those perogies. There were stands selling food and goods scattered all throughout the square, and my favorite one was full of handmade Polish china. We even got to see the house where John Paul II lived when he stayed in Krakow. Surreal to be walking the same streets as such a great saint.

Later that day, we went to the Divine Mercy Shrine in Krakow, the basilica where Saint Faustina is buried. In Saint Faustina’s diary, she speaks of the immense mercy of Christ, that he reveals to her in private revelation. Visiting the shrine was an amazing experience, and getting to pray a Chaplet of Divine Mercy DURING the hour of mercy AT the Divine Mercy Shrine WITH the sisters of Divine Mercy WHERE Saint Faustina is buried was, I dunno, kinda cool I guess. (I’m kidding. It was really freaking cool.) The bottomless ocean of Christ’s mercy served as a stark contrast to the ocean of sorrow found at the concentration camps.

The next day we traveled to the hometown of John Paul II, Wadowice. We were able to pray in the chapel dedicated to him in his parish church and see the home he and his family lived in. Oh, and there’s a high possibility that I tried some of the famous “pope cake”… 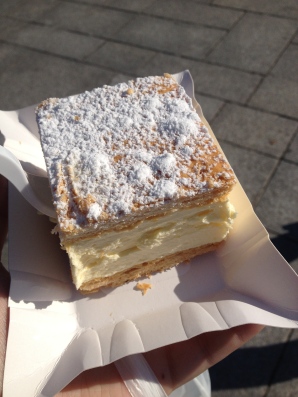 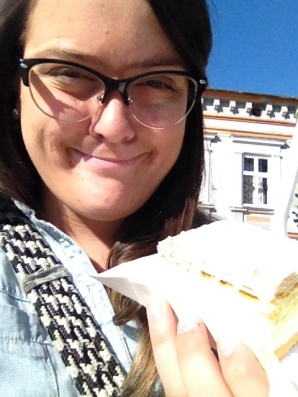 It was a beautiful, sunny day and my favorite part was getting to wander down a path through some trees in the sunshine. It felt like paradise.